OA’s Spanking Bench is built to the same standards of excellence and extreme performance as everything else from my shop. This piece is built from industrial aluminum extrusion and matching fittings, which create a very strong and rigid structure that remains relatively light in weight. The extrusion used in the SOM II Bench is recycled from an industrial source. It’s in great shape, but may have some minor marking. The bench is quick and easy to take down, assemble, and adjust… it uses specially designed tee bolts that match the extrusion, each rated for up to a 1500 pound load! The bench breaks down to a reasonable size for storage and portability. The leg supports adjust easily, because everyone doesn’t measure the same from waist to knee. Assembled, the bench has a huge 36″ x 39″ footprint for stability, and includes non-slip, non-marking rubber feet on the four corners for safe and secure use on any surface.

For your machine spanking needs, it’s not enough to pull the spanking machine up next to the bench and aim it this way and that until things work right. The SOM Spanking Bench offers an optional mount for the SOM II spanker head. Mounting the spanker off the bench provides the ultimate in stability and paddle-to-target adjustment and control. The spanker mount provides full infinite adjustability for paddle height, angle, and front-to-back spacing for that “just right” attack angle.

Restraints? You bet. First up, attachments points, ones you can put anywhere on the bench. They’re welded steel powdercoated gloss black, and attach anywhere there’s an available chunk of extrusion on which to bolt (and that’s just about everywhere on this bench). An industrial electromagnet rated for 600 pounds mounts quickly in a range of positions provides highly customizable restraint and timed release. Operate it from a timer or use the SOM2PC’s integrated timer and accessory port to control release. Further customizations are likely on the horizon.

The base Bench comes complete and ready to use. Assembly is simple using the enclosed instructions and your 13mm wrench or socket and rachet. Your bench arrives with pre-positioned gussets for a generic configuration, and you’ll put together base, four uprights, top, two legs, and two leg supports. Once assembled, you can adjust the bench in several ways to nicely accommodate your occupant. When ordered with the mount, your parts can also be easily configured into the SOM II LT stand.

Attachment Points. Shown in the fouth picture at left, each attachment point is fabricated of welded steel, powdercoated gloss black. The steel loop is big enough to fit anything you’re likely to want to run through it. Each point attaches to the Bench with one included t-bolt and 13mm hex nut. Once bolted snugly into any space of extrusion, the attachment point is rock solid and extremely strong. Four points are included with your Bench, with additional pieces available by the pair.

SOM II Spanker Mount. Leveraging the exceptional strength and rigidity of the aluminum extrusion, the SOM II Spanker Mount creates a solid mount for your spanking machine. It’s also totally adjustable, providing infinite adjustability in height, back-off (distance between rear of bench top and paddle when perpendiclar), and angle. The Spanker Mount consists of three lengths of extrusion, two of which are double-heft, and all gussets and hardware to assemble and attach to your Bench.

Timed Release Restraint. This smartly designed system starts with a 12 volt electromagnet rated for 600 pounds of holding force. It is mounted to a short length of extrusion, and includes the hardware required to firmly mount it to the Spanking Bench at a number of different locations. Your package also includes a “wall wart” power supply and 120 VAC digital timer. Although listed as a bench accessory, the Time Release Restraint system can be used in ways limited only by your imagination, with or without the SOM II Spanking Bench. The TRRS can also operate un the control of the SOM2PC, powered from the IPS.

You have several options with this system. The general approach is to secure the occupant to the steel plate with handcuffs, rope, or leather restraints. With this plate attracted to the magnet, they can’t get loose until the magnet releases. Alternately, you can attach a release key to the steel plate and provide for its retrieval with a rope or cord… again, ther occupant will be unable to retrieve the key until the magnet releases. A range of techniques are described in the use documentation. The electromagnet operates from a 12VDC power supply, which may be controlled by a timer or the SOM2PC accessory channel.

An excellent accessory for any self-bondage is a one-way tensioner such as the Rope Ratchet (available at Home Depots and Lowe’s stores, among others). The system allows you to attach restraints and subsequently take out slack, providing a more secure feeling. Tensioners work very well in conjunction with the Timed Release Restraint. 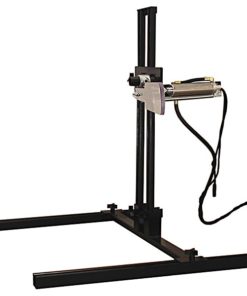