Since 2002, I’ve delivered quality spanking machines using a traditional design approach, motor driven and spring or gravity powered. Throughout that time, I’ve been experimenting with pneumatic power… it was clearly superior for a spanking machine, but not easily made feature-rich. It finally became clear that power source is only half of the equation. The SOM II breakthrough is the combination of pneumatic power with highly capable microcomputer control. The SOM II computer provides complete user control of stroke power in real time from the remote handset. It also provides a series of automatic modes, both patterned and random, that make the machine perfect for the solo player.

The single paddle is designed to be used across both buttocks, unlike my previous commercial SOMs. The paddle is heavy 3/8″ clear polycarbonate, virtually unbreakable and strong enough for anything. Options are available in the accessory section. The SOM II offers you total flexibility in setup. The stand supports the head unit at any height, from the floor to about 36″ high with infinite adjustability. The head can both swing and pivot… turn relative to the stand and the ground to work in any direction and at any angle, from straight up to straight down. Complete control over spanking speed and power from the hand control, in real time. You’re not limited to spanking on a bench. Go for it on the bed, the ground, kneeling over, even suspended or in a sling! You are looking at the ultimate spanking machine.

Want to be lazy, do something else to your target, or play by yourself? Flip the switch into automatic and set the mode you like best! Review the Automatic Modes.

The hand control connects to the SOM II head unit with an XLR pro audio connector over a 10 foot cord, which provides 12 volt power from the head unit. The hand unit is fully labelled including the automatic modes, and constructed of a durable black plastic. Note that like any computer, the hand control requires reasonably careful handling and should not be dropped.

So that’s how you control it, but what can it do? The SOM II can strike from butteryfly-soft to VERY hard, depending on power setting and incoming air pressure. More pressure means more striking force, up to 150 PSI (the capability of the system). Once the air pressure is set, you control the power in real time with the “Power” knob on the corded hand control. Turn the knob and instantly go from feather-soft to full powered. Maximum power puts 265 pounds of force behind the stroke! What about striking speed? While it’s theoretically unlimited, the paddle does need some time to recover to the “loaded” position. This time varies a little with the striking power and machine setup, but it’ll generally do about 80 full strokes per minute. That’s more than one stroke every second!

Thinking Beyond the Box: A Truly Flexible Spanker

Stand assembly is all tool-free, using industrial channel and matching nuts secured with comfortable hand knobs. The mounting and adjustment of the head unit to its mount is achieved with the inlcuded 1/4″ hex key. When broken down, the entire SOM II fits easily into a hard-sided golf bag, which I’ve found the ideal transport system. Complete assembly or disassembly can be donw in less than one minute. Given the high levels of force involved, the stand may benefit from some extra weight to help hold it in place for the duration of a session.

A variety of air sources are great for the SOM II, from a complete air compressor to a holding tank filled at the local gas station. After a long search, I identified a suberb small compressor for more users. The Senco PC1010, pictured at right, is compact, quite, and inexpensive. At 20 pounds, it’s super portable. At 67 decibels, you can hold a normal conversation right next to it, and not fear complaints even in an apartment. It’s not large enough to fully power up the SOM II… the PC1010’s pressure peaks at 115 PSI, and it’s small enough that rapid striking at high power levels will overwhelm it. For most users, though, it’s a great solution. I offer it below when purchasing your SOM II, and it is also available form many retailers. 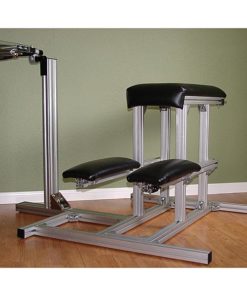 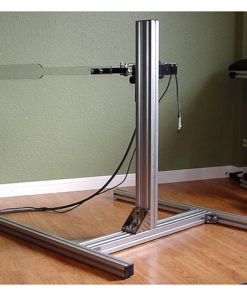